Following the latest advice from the Victorian Government and the release of Victoria’s Roadmap to deliver the National Plan, ACMI at Fed Square remains temporarily closed. Unfortunately, all onsite museum visits, events, programs and screenings up until Friday 5 November will be postponed or cancelled. Unfortunately, the 1–11 October sessions for Another Round will be cancelled.

Customers with paid tickets will be automatically refunded via the card they made the purchase with. If your card has expired, please email ticketdesk@acmi.net.au to make alternative arrangements. Refunds may take 5–10 days to appear in your account. Keep an eye on our website and social media channels for the most up-to-date information regarding future events, as further government announcements are made.

We wish our extended ACMI community well during this challenging time. Look after yourself, and each other.

Winner of the Academy Award for Best International Feature, Another Round tests the theory that we’re a better version of ourselves after a few drinks.

Another Round - Official Trailer. In Cinemas February 11 by Umbrella Entertainment

A hilarious and heart-breaking spellbinder.

Martin (Mads Mikkelsen) and his three best friends are all stuck in variations of the same rut – underperforming at work, in stagnating relationships, and suffering from a general malaise at middle-age. At a boozy birthday dinner, the four high school teachers decide to test out the theory that maintaining a constant level of intoxication can improve one's life considerably.

Initial results are promising: Martin’s increased blood alcohol concentration brings with it more confidence and a looser style of teaching. His previously mutinous students respond well, and his long-suffering wife Trine (Maria Bonnevie) is pleasantly shocked at Martin’s reinvigoration. However when the group decide to ramp up the experiment, the room begins to spin and each man must reckon with the question – what makes you feel the most alive?

Director Thomas Vinterberg reunites with crossover star Mads Mikkelsen after the pair earned worldwide acclaim for The Hunt (2013), including Best Actor for Mikkelsen at Cannes. The supporting cast, made up of Vinterberg regulars and Danish cinema stalwarts, are pitch-perfect in their ability to mine the humour and despair that come with inebriation.

Refusing to cast judgment, Vinterberg has instead crafted a nuanced, hilarious and provocative celebration of alcohol in this self- proclaimed "tribute to life".

READ: How Thomas Vinterberg Overcame the Greatest Tragedy of His Life to Make Another Round
Eric Kohn, Indiewire, Dec 2020 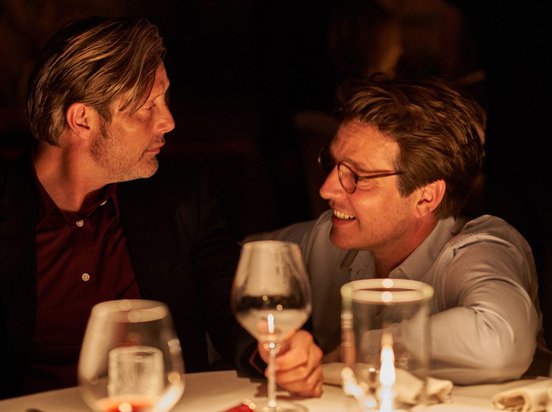