A spell-binding mystery fuelled by awe and wonder. Chilling and hypnotic... a remarkable work.

St. Valentine’s Day, 1900. On an intoxicating summer’s day, a party of boarders at the exclusive Appleyard College and their chaperones, Mathematics mistress Miss McCraw (Vivean Gray) and the graceful Mademoiselle de Poitiers (Helen Morse), travel to the magnificent ancient rock formation at Mt. Macedon. When Miss McCraw and three of the senior girls – Irma, Marion and the ethereal Miranda (Anne-Louise Lambert) – vanish during the course of the afternoon, their disappearance sets off a chain of disquieting and tragic events.

Credited with reinvigorating the ‘70s Australian new wave in film, Peter Weir’s enduring mystery classic was shot by not one but two key creatives who would go on to each win an Academy Award – Cinematographer, Russell Boyd (Master and Commander, in 2004) and camera operator, John Seale (for 1996’s The English Patient). Boyd’s experiments with diffused exterior light were key in establishing the film’s dream-like atmosphere, as were Bruce Smeaton’s evocative score and Gheorghe Zamfir’s haunting pan flutes. Beyond the mystical elements in Joan Lindsay’s literary classic, screenwriter Cliff Green was also alert to the nuances of representing the presence of an anachronistic colonial class grafted onto a primeval landscape predating civilisation.

READ: Australian Gothic: from Hanging Rock to Nick Cave and Kylie, this genre explores our dark side
Emma Doolan, The Conversation, 4 July 2019 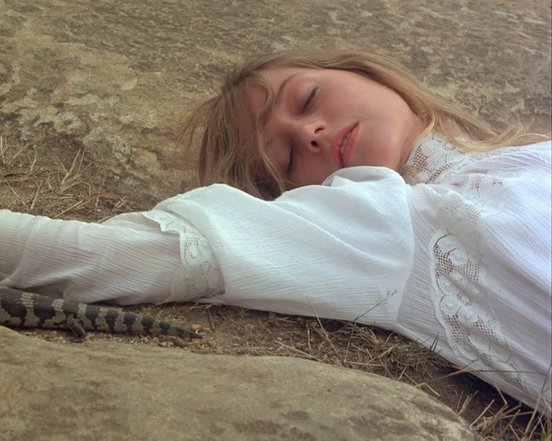