Romance pokes through the violence and discord like a bloom through cracks in the pavement. Love conquers all.

Stick around after the screening for a pre-recorded chat with supporting cast member Willem Dafoe.

Frequent Lynch collaborator Laura Dern plays Lulu, a sexually charged half to the whole that is made up by Sailor, Nicolas Cage giving his most erratic take on an Elvis/Johnny Cash archetype. Together the pair hit the road with the law and an array of hitmen on their tail thanks to Lulu’s deranged mother Marietta (played by Dern’s actual mother, Diane Ladd, in a role that earned her an Academy Award nomination). As in all Lynch properties, the supporting cast is stacked with an eclectic concoction of character performers like Willem Dafoe, Harry Dean Stanton, Crispin Glover, J.E. Freeman and Isabella Rossellini. Winning the Palme d'Or at the 1990 Cannes Film Festival in what was considered a controversial conquest at the time, Wild At Heart has gone on to endure as one of Lynch’s best films and most accessible.

“There is something inside of me that resists the films of David Lynch,” Roger Ebert wrote in his 1990 review of Wild At Heart. “I am aware of it, I admit to it, but I cannot think my way around it.” That was not an uncommon reaction at the time of the film’s release and remains true of not just Lynch’s film work then, but the entire breadth of his artistic output across television, music, art and more. ‘Divisive’ is a key element of Lynch as an auteur and even though Wild At Heart is perhaps his most liked film, it’s still a challenging watch as it mixes elements of black comedy, crime, surrealism, romance and thriller all within the package of a road trip movie.

READ: The craziest, most WTF moments in Wild at Heart
Oliver Lunn, Dazed, May 2015 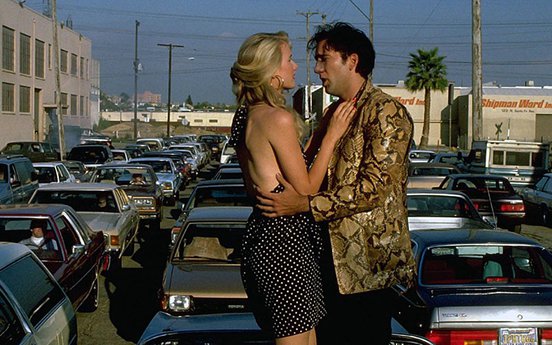