A selection of short films by established and emerging filmmakers.

The Ninth Tower
Kauthar Abdulalim / Australia / 2021 / 14 min / Drama
Teenager Hassan, a carer for his ill mother, is pushed to the brink when the state government suddenly imposes a hard lockdown at the nine towers in Flemington and North Melbourne housing estates

Blind Body
Allison Chhorn / Australia / 2020 / 14 min / Documentary
As abstract shapes come into focus, dim memories surface. With Blind Body, Allison Chhorn offers an impressionistic portrait of her grandmother Kim Nay, a survivor of the Khmer Rouge. Partially blind, Kim spends her days in a mostly sonic and textural world, in which the sound of rain, the voices of Khmer radio, and distant birdsong summon the sensations of a lost homeland.

Wurundjeri Baggarrook
Rochelle (Rocky) Humphrey / Australia / 2021 / 16 min / Documentary / Australian Premiere
The last Coming of Age ceremony held by the Wurundjeri people took place at Coranderrk, 185 years ago; from that point all cultural ceremony and practice was forbidden. A group of Wurundjeri women, descendants of the families who went through the last recorded Wurundjeri ceremony are determined to be a 'living culture', reviving ceremonial practice. Wurundjeri Baggarrook is not only documenting this history in the making, but leading insight into the complexities of contemporary Aboriginal identity. A significant untold story is ready to be revealed, whilst the rest of Australia is getting up to speed with the nations real history; these brave Wurundjeri women know how to build a strong and proud community.

From the HRAFF Emerging Filmmakers Fund

How To Build a Forest
Jenn Tran / Australia / 2022 / 6 min / Narrative
Over a century after all humans have left Earth, a scientist returns on a mission to understand how her colony might build its first forest. She reflects on the nature of her task and the complexity of the ecology she seeks to replicate, centering her perspective from Agnes Denes' land artwork 'A Forest For Australia' (1998). What begins as a scientific mission becomes a meditation on place, memory, loss and the weight of progress.

Facade
Alice Gilbert / Australia / 2022 / 5 min / Claymation
A claymation that explores the theme of identity. FACADE follows the central character from a quirky cocktail party into an abstract world of imagery, as they shed their layers to reveal different parts of themselves. As each layer is revealed, the film considers the overarching question: who are we at our core?

Join us for a post-film panel to hear from our three inaugural emerging filmmakers. 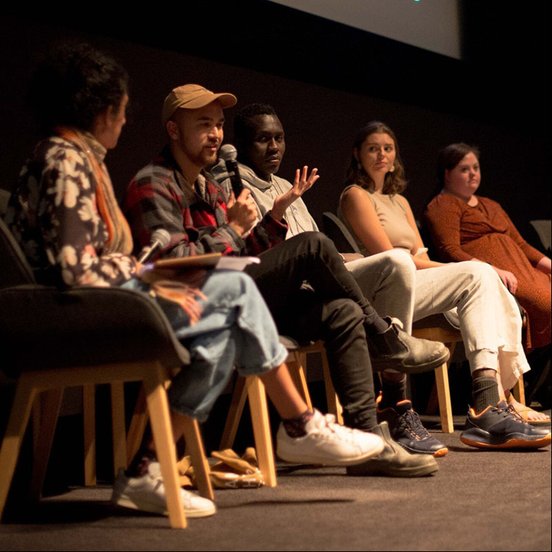