A stunning VR tale of metamorphosis in the Brazilian Amazon and a gift sent by the Yawanawa.

Awavena expands the boundaries of what immersive video can do

​​​​​​Awavena was made by Emmy and AACTA award-winning artist and director Lynette Wallworth, and screened to international acclaim at the 2018 Venice International Film Festival. It had its Melbourne debut at ACMI in 2019. The second in a series of VR works by Lynette Wallworth and producer Nicole Newnham (Collisions was the first and exhibited at ACMI in 2016), Awavena is a stunning tale of metamorphosis in the Brazilian Amazon.

For the Amazonian Yawanawa, "medicine" has the power to take you inside a vision to a place you have never been. By collaborating with artist Lynette Wallworth, Hushuhu, the first woman shaman of the Yawanawa is able to use VR like medicine to open a portal to another way of knowing. Awavena is a collaboration between a community and an artist, melding technology and transcendent experience so that a vision can be shared, and a story told of a people ascending from the edge of extinction.

Wallworth was invited by the Yawanawa to create this stunning VR experience using cutting edge technology to mirror their vision states. Awavena was an unmissable experience and a gift from the Yawanawa that they hoped would shift our consciousness and change the way we perceived the world and the decisions we make.

Lynette Wallworth is an Emmy Award-winning artist/filmmaker, and a world leader in using new technologies to tell powerful non-fiction stories that generate impact. Her works include the interactive video Evolution of Fearlessness; the full dome feature Coral; and VR narrative Collisions. Wallworth has been awarded a UNESCO City of Film Award, the Byron Kennedy Award for Innovation and Excellence and Foreign Policy magazine named her in 2016 as one of the “100 Leading Global Thinkers’ of the year. Her work has shown at the World Economic Forum, Davos, Lincoln Center for the Performing Arts, the American Museum of Natural History, New York, Australian Centre for Contemporary Art, the Smithsonian, as well as film festivals including Sundance Film Festival, Venice Film Festival, London Film Festival, Tribeca Film Festival, Sydney Film Festival, and the Adelaide Film Festival. Wallworth is a member of the World Economic Forums Global Future Council on Virtual and Augmented Reality.

Hushahu Yawanawá is the first woman Shaman of the Yawanawá. She is one of the first medicine women to emerge from the peoples of this region of the world. As shaman, she serves as spiritual leader to the people of the Yawanawá territory, and supports young Yawanawá and other non-native students in learning the spiritual traditions of the Yawanawá. On the path to becoming a shaman, she went through an intensive training process guided by her father, Raimundo Tuinkuru, and the late shaman elder Tatá Yawanawá. Today, she is among the most respected spiritual leaders of the Yawanawá people; her revolutionary work has drawn national attention in Brazil and internationally. Hushahu's calling and endurance to walk the healing path has opened the door for other Yawanawá women and women around the world.

Nicole Newnham is an Emmy-winning documentary producer and director, Sundance Film Festival alumnus and five time Emmy-nominee. Awavena is her second collaboration with director Lynette Wallworth, with whom she produced the breakthrough VR film Collisions. She co-directed and produced The Revolutionary Optimists, winner of the Sundance Hilton Sustainability Award, and Sentenced Home, both of which aired on PBS’ series Independent Lens. She also instigated, co-produced and directed the acclaimed documentary The Rape of Europa, about the Nazi war on European culture, which was nominated for a WGA award and shortlisted for the Academy Award. Passionate about the possibility of leveraging powerful documentary stories for social change, she co-founded a story and data-mapping platform for youth to improve their own communities, called Map Your World.

Tashka Yawanawá is chief of the Yawanawá people in Acre, Brazil. As chief, he leads 900 people stewarding 400,000 acres of Amazon rainforest in Brazil. The son of the former leader of the Yawanawá, Tashka grew up witnessing the virtual enslavement of his people by the rubber industry and experiencing the near annihilation of the tribe’s culture by missionaries. Since the 1980s, Tashka has actively fought for the rights of indigenous peoples. Realizing that he needed further education to improve the situation of the Yawanawá, he pursued higher education in the U.S. and abroad. He was directly involved in the creation of the Indigenous Lawyers Association and co-founded the Indigenous and Non-Indigenous Youth Alliance, through which he shares the experiences and knowledge of the Yawanawá with youth around the world, and works with projects that guarantee the preservation of different indigenous cultures.. In 2001, Tashka returned to Brazil, and chose to use the knowledge gained from his experiences abroad to help his people transform their future. He became the youngest Chief in the history of the Yawanawá at age twenty-five. In a short amount of time, Tashka and Laura have managed to double the extent of Yawanawá territory, reinvigorate Yawanawá culture, and establish economically and socially empowering relationships with the outside world. Tashka and Laura have two daughters—Kenemani and Luna Rosa—and divide their time living and working in the Yawanawá community and Rio Branco, Brazil.

Wallworth considers how she has consistently worked with emerging media technologies to reflect on and deepen connections between people and the natural world. 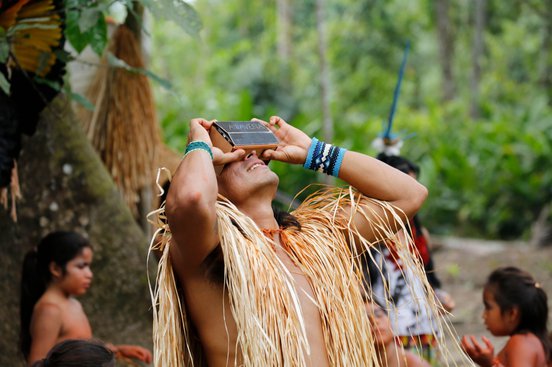