EMMA. - Official Trailer [HD] - Now On Demand and In Theaters by Focus Features

de Wilde’s bright and lively adaptation of Austen’s 1815 novel Emma feels both modern and authentic in the best way, inviting everyone, diehard Austenites and newbies alike, into its embrace.

One of Jane Austen’s most beloved characters, Emma Woodhouse (Anya Taylor-Joy), pulls all of society into her orbit with her matchmaking schemes. "Handsome, clever and rich", and with a doting father (Bill Nighy) to entertain her every whim, Emma’s life is one of charming mischief – that is, until she loses control of the many courtships she sought to influence.

Director Autumn de Wilde draws from screwball comedies to great effect (she cites Bringing Up Baby as one inspiration) whilst also allowing dramatic moments between Emma and her moral compass/romantic interest Mr. Knightley.

With a slew of female creatives in front of and behind the camera, including screenwriter Eleanor Catton (The Luminaries) and composer Isobel Waller-Bridge (Fleabag), Emma also dedicates ample screen time to the friendship between Emma and Harriet (Mia Goth), a refreshing update on previous adaptations. Sumptuous production design and candy-coloured costumes make Emma a veritable feast for the eyes. 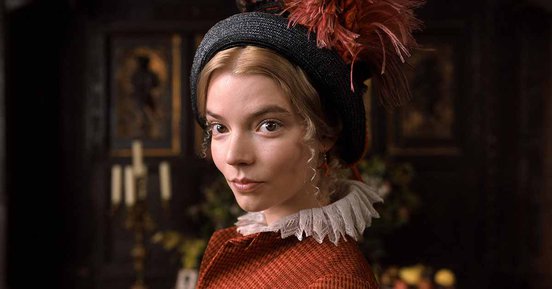