A visually spellbinding observational portrait of one of Europe’s last wild beekeepers.

Quiet, intimate and intense, but touched with a breath of epic grandeur. It’s a poem including history.

When filmmakers Tamara Kotevska and Ljubomir Stefanov set out to make an environmental documentary in rural Macedonia, they had no idea they would stumble across a protagonist so compelling that it would change the whole trajectory of their film. Sixty-something Hatidze Muratova lives in an isolated village in the mountains, where she makes a living cultivating honey using traditional beekeeping methods and cares for her elderly, bedridden mother.

Hatidze maintains a careful balance when collecting honey – her motto is “half for them, half for us” as she expertly weaves her way through swarms of wild bees. But when the nomadic Sam family move in next door, their attempts to cash in on the honey trade threaten to shatter the fragile equilibrium that Hatidze has nurtured for so long.

Honeyland premiered at the 2019 Sundance Film Festival, where it picked up the World Cinema grand jury prize and kickstarted a global tour of critical acclaim and prestigious prizes. The film also made Oscars history as the first film to be nominated in both the best documentary feature and best international film categories. 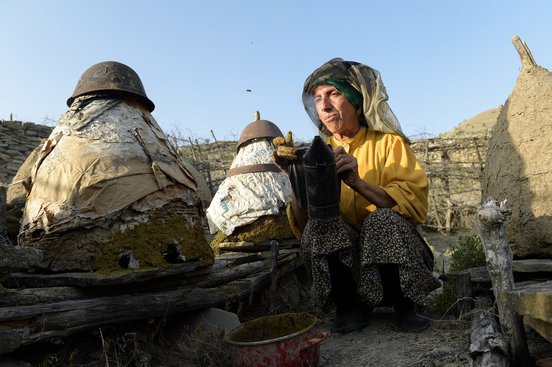