A God in Every Lentil

A double bill of films for the senses from MDFF sidebars, Food (A God In Every Lentil) and Bloom (Flores).

Luis, a screenwriter who lives in Madrid with his wife Paula and infant son, journeys to Cocentaina, his childhood home in the hinterland of Alicante, in Spain's Valencia region. He's heading there to collaborate with his chef brother Kiko Moya and sommelier cousin Alberto Redrado on a book focused on the family's Michelin star-awarded restaurant, L'Escaleta, regularly listed among the best restaurants in Spain and Portugal. Childhood memories and local flavours have always guided Kiko in the creation of his dishes, but with Luis back in the family fold, the two men embark on a culinary project that also becomes a journey through the personal histories and influences that have shaped them, continuing a legacy established by their mother, father Paco, aunt Nieves and uncle Ramiro before them.

Between scenes featuring elliptical conversations and family recollections, Miguel Ángel Jiménez doesn't forget to capture images that also offer a visual feast for the senses, drawn from the menu at L’Escaleta which is built around local products from the fields and the sea: oysters and red shrimp from the Mediterranean, honey from the Carrascal de la Fuente Roja park, the prized Flor de Sal from the lagoons of La Mata, and Bomba rice from the Marjal Pego-Oliva park.

The entire local population of the Azores archipelago was forced to move to mainland Portugal due to an uncontrolled proliferation of hydrangeas which colonised the landscape, taking over the native flora, when collectors introduced the lilac blooms to the island in the nineteenth century. Shot in a highly subjective quasi-documentary style whose protagonists include military recruits undergoing training on the island of São Miguel and a Dutch collective that has recently established apiaries and a flower exportation business on the island, Jorge Jácome's evocative short film is a poetic and politically-inflected work that muses on history, identity, belonging and adaptability. 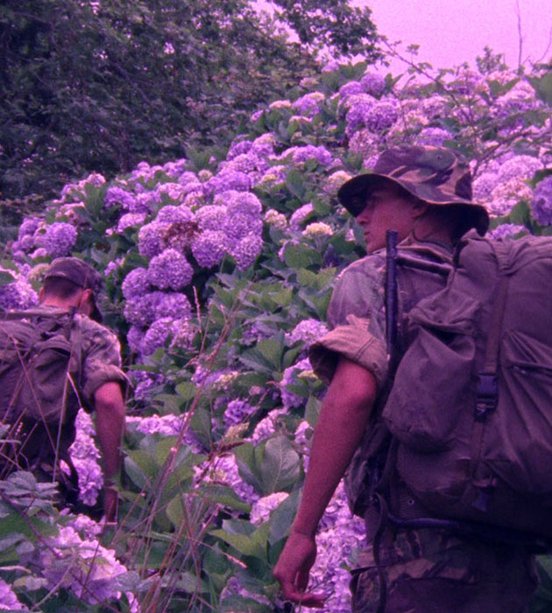 Act fast! The program will close once funds are exhausted