Dr Plonk with live score by the Stiletto Sisters

With daylight savings drawing to a close, join us in the setting sun for Rolf de Heer's masterful pastiche of silent cinema paired with swoon-worthy score by Melbourne's Stiletto Sisters.

In the year 1907, Dr Plonk, an inventor exuberantly played by street performer Nigel Lunghi (aka Mr Spin), has discovered that the world will end in 101 years. When his peers don't believe him, Dr Plonk, with the assistance of his wife (Magda Szubanski), his assistant Paulus (Paul Blackwell) and his dog, builds a time machine and travels to Australia circa 2008 in search of evidence.

As his protagonist time travels into the future, Rolf de Heer transports us back in time in an uncanny fashion. Using film stock, and shooting on a hand-cranked camera, de Heer's film captures and celebrates the silent film aesthetic. This is also a celebration of the physical comedy prowess of the film's stars, Lunghi, Blackwell and Szubanski – and Reg the dog. Whip-smart and hurtling along quick-smart, Dr Plonk is a fast-paced comedic whirlwind.

The Dr Plonk score has been composed by Graham Tardif. We will be joined by the Stiletto Sisters — original performers of the film's score — to perform live on stage.

This very special free performance is co-presented with Fed Square. Arrive early to grab a free gelato, a deckchair or bring your own chair or picnic rug.

About the Stiletto Sisters

The Stiletto Sisters are a dynamic and vibrant trio, featuring the sparkling eyes and ready smiles of Hope Cstoros on violin, Judy Gunson on piano accordion and double bassist, Jo To. Gypsy melodies, seductive tango rhythms and sensuous songs from Europe and Latin America – this will be music to swoon by. The Stiletto Sisters will be joined by Phillipa Safey on piano. 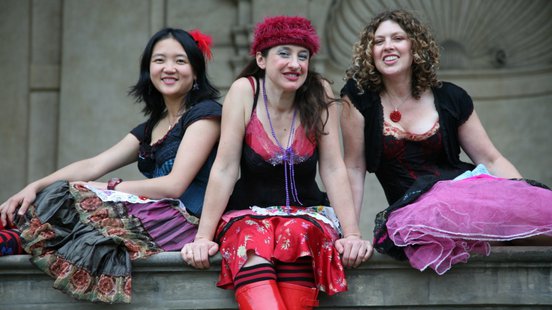