This week we celebrate the career of Derek Jarman (1942–1994) – an essential figure of experimental and artists’ film, British cinema, queer filmmaking and gay rights activism – by highlighting a variety of works from his most well-known period. The program pairs his provocative and playful biographical features Caravaggio (1986) and Wittgenstein (1993), with a selection of his most memorable music videos.

With a varied, unique output that combines the avant-garde, modern theatre and a paradoxical affection for traditionalism, Jarman remained an outsider to the wider currents of cinema throughout his life. Undeterred, his peerlessness and striking artistic vision attracted long-time collaborators such as actress Tilda Swindon and costume designer Sandy Powell, and eventually led to widespread praise and exposure in the last decade of his life. Originally trained as a painter, his skill at creating eye-catching shapes and images led to a brief stint as a set designer for theatre and film, including work on Ken Russell’s The Devils (1971). Inspired by the “camaraderie” of filmmaking, Jarman obtained his first Super 8 camera and began an incredibly prolific period creating experimental-films-cum-home-movies that were consciously informed by US underground filmmakers like Maya Deren, Andy Warhol and Kenneth Anger.

Seeking bigger opportunities, Jarman would direct a handful of low-budget narrative features (including the seminal punk film Jubilee [1978]) before spending seven years raising money for his passion project, Caravaggio, a fictionalised retelling of the life of the artist whom Jarman considered “the most homosexual of painters”. The film won a Silver Bear at the 36th Berlin International Film Festival, heralding Jarman’s breakthrough as an established moving-image artist. So too began his period of most outspoken queer activism, revealing his HIV positive diagnosis to the public in December 1986 and discussing its implications openly. Living with AIDS would heavily inform Jarman’s outlook on life as well as the rest of his artistic output, right up until his remarkable and uncompromising final feature, Blue (1993).

We present Caravaggio alongside Jarman’s Wittgenstein, a similarly loose, yet more playful account of the life and work of the titular Austrian-born philosopher. Accompanying each feature are music videos made by Jarman for both popular and lesser-known artists including The Smiths, Marianne Faithfull, Pet Shop Boys and Easterhouse. While Jarman expressed a distaste for the pop music of his own youth in his profile for BBC2’s Arena (preferring Jean Sibelius over Buddy Holly), his music videos constitute a significant contribution to his art, often focusing on “renaissance”-like imagery and Super 8-style speed and double-exposure techniques. They also belong to Britain’s Thatcher-era ecosystem of subversive queer art-making – often hidden in plain sight.

This week’s supplementary materials include an interview about the filming of Caravaggio from the time of the film’s release, some very jubilant behind-the-scenes footage from Wittgenstein, and Harlan Kennedy’s essay on Jarman’s career, originally published in Film Comment months before his death. Also included is the aforementioned BBC2 Arena program, which weaves a huge number of film clips from across Jarman’s entire career into an interview conducted at his home in Dungeness, Kent; an approach that apparently Jarman himself loved.

WATCH: About Caravaggio and Filming
Institute of Contemporary Arts, 1987 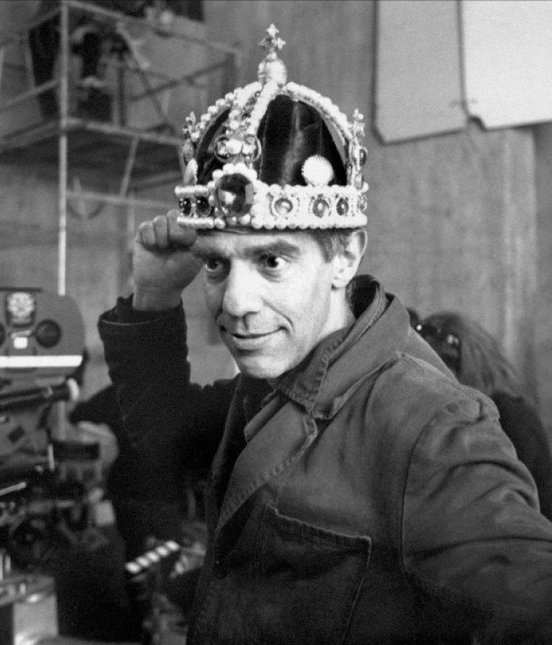