This week we are celebrating the luminous work and career of Ingrid Bergman (1915–82) by highlighting her sojourn in the United States during the Golden Age of Hollywood in the late 1930s and 1940s.

This program features Bergman’s iconic and deeply nuanced performances in two of the most important films she made during this period in her career: the American remake of her breakthrough Swedish film, Gregory Ratoff’s Intermezzo: A Love Story (1939), and Alfred Hitchcock’s extraordinary Notorious (1946).

Bergman led a stellar acting career that spanned over 40 years. Known for her natural beauty, multilingual prowess and her work with some of cinema's most influential auteurs, Ingmar Bergman, Alfred Hitchcock, Roberto Rossellini and Jean Renoir, she has become a true icon of world cinema and the Golden Age of Hollywood.

Bergman began acting in a number of Swedish and German films throughout the 1930s. In 1936 she starred in the lead role of Gustaf Molander’s Intermezzo which caught the attention of prominent American film producer David O. Selznick, who persuaded her to come to Hollywood and remake the film in English as Intermezzo: A Love Story. The American public quickly became enthralled with Bergman, and the actress went on to star in some of her most iconic roles, most notably alongside Humphrey Bogart in Casablanca (1942) and in her Oscar-winning performance in Gaslight (1944). She followed this up with a slew of successful leading roles, as well as starring in three of Hitchcock’s most important American films from the 1940s, Spellbound (1945), Notorious and Under Capricorn (1949).

In 1949, Bergman reached out to Italian auteur Roberto Rosselini. Struck by the neorealist style that personified his World War II trilogy, Bergman wished to act in films that were far removed from the glamour of Hollywood. The two began to work on what would become Stromboli (1950), and during the making of the film they began an extramarital affair. This was eventually leaked to the press and caused a notorious scandal, souring Bergman’s image with the American public and leading to a quasi self-exile from Hollywood for a number of years before her triumphant return in Anastasia (1956).

The two films we’ve programmed this week, Intermezzo: A Love Story and Notorious, are an embodiment of Bergman’s Hollywood period. Her enthralling acting and command of the camera can already be glimpsed in her short screen test for Intermezzo: A Love Story, included in the supplementary materials accompanying this program. Most notably, both of these films centre their narratives around the scandals and tensions of forbidden love that would come to echo Bergman’s personal life at the very end of the 1940s. In our supplements we’ve also included an in-depth live interview Bergman gave in 1981, just a year before she died, where she jovially discusses her early career, her work in the United States in the 1940s, the peculiarities of working with Hitchock and why she left Hollywood to work in Europe. 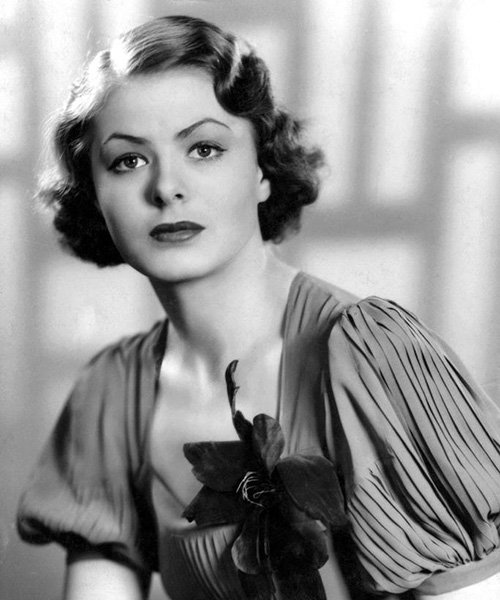