From Mosfilm with Love

The Story of Asya Klyachina

Andrei Konchalovsky’s second feature, also known as Asya's Happiness – one might immediately surmise that this alternative title is ironic – was grossly at odds with the mandated (and wholly unironic) tenets of “Socialist Realism” and was accordingly suppressed by Soviet authorities. It remained unreleased until 1987, when it received widespread acclaim. Predominantly cast with non-professional actors, it centres on Asya (Iya Savvina), a pregnant woman who is a member of a struggling farm collective whose workers battle poverty, disorder and each other. This bleak, exquisitely shot, neo-realist portrait of rural life provides a subtle yet highly critical vision of the distant and indifferent governmental bureaucracy that controls the collective’s existence.

“At about the same time as [Konchalovsky] was experiencing censorship problems with Asya’s Happiness, Tarkovsky was battling the censors over Andrei Rublev …”; the latter masterpiece, like Tarkovsky’s two prior films, was co-written by Konchalovsky. Read more in Greg Dolgopolov’s excellent annotation in Senses of Cinema below.

The Story of Asya Klyachina is streaming for free on YouTube. Make sure you enable English subtitles.

Andrei Konchalovsky on Andrei Tarkovsky
Konchalovsky co-wrote Tarkovsky's first 3 films – Steamroller and the Violin, Ivan's Childhood, and Andrei Rublev – and here is an excerpt from the documentary Tarkovsky: Time Within Time, directed by P.J. Letofsky. 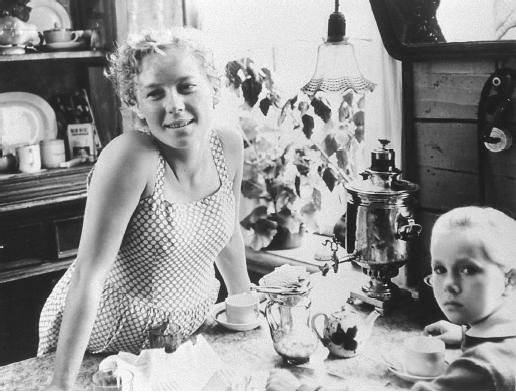