Following the latest advice from the Victorian Government, ACMI is temporarily closed. Unfortunately, the Sat 28 Aug session for Ellie & Abbie (And Ellie's Dead Aunt) has been postponed.

Customers with tickets for these dates will be automatically refunded via the card they made the purchase with. If your card has expired, please email ticketdesk@acmi.net.au to make alternative arrangements. Refunds may take 5-10 days to appear in your account.

We wish our extended ACMI community well during this challenging time. Look after yourself, and each other.
_______________

Superbly written, beautifully acted ... it is funny, it is heartfelt and it covers so many facets of queerness

Stick around after the screening for a pre-recorded interview with writer/director Monica Zanetti.

From the title alone, it’s obvious Ellie & Abbie (And Ellie’s Dead Aunt) will not be your standard rom-com. Instead, everything about it subverts the traditions of the genre: from the two female leads to the existence of a character that’s, well, dead. Sophie Hawkshaw plays 17-year-old Ellie, a model student who is trying to work up the courage to ask her crush, Abbie (Zoe Terakes), to the upcoming school formal after coming out to her mother (Marta Dusseldorp). Throwing a spanner in the works is the sudden appearance of her dead gay Aunt Tara (Julia Billington), whose dating advice is stuck firmly in the period which she died: the eighties. Featuring Rachel House and Bridie Connell in scene-stealing supporting roles, the eclectic cast helps bring to life a heart-warming and hilarious romance.

It’s clear Zanetti has an intimate understanding of the rom-com and because of that, is able to subvert the conventions of the genre and expand the type of story that can be told. The central romance is brought to life so effectively by Hawkshaw and Terakes that it’s impossible not to root for the romance at the core of the film, which are all enhanced by a clear and confident visual aesthetic. Yet like all of the best rom-coms, the love story is just the surface layer of the narrative. Among all the genuine laugh-out-loud moments and perfectly timed comedic beats, the fantastical element of a ghost relative is used as a vessel to talk about gay rights, grief, and family secrets as Ellie & Abbie (And Ellie’s Dead Aunt) explores how our past can also impact our present. 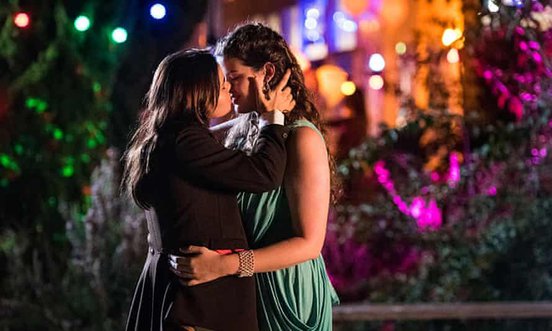