Following the latest advice from the Victorian Government, ACMI will be temporarily closed from Fri 6 August. Unfortunately, Fri 6 August session for Legally Blonde will be cancelled.

Customers with tickets for these dates will be automatically refunded via the card they made the purchase with. If your card has expired, please email ticketdesk@acmi.net.au to make alternative arrangements. Refunds may take 5-10 days to appear in your account.

We look forward to welcoming you back to ACMI soon. Look after yourself, and each other.

A feminist romance between a woman and her own best self.

Following on in the legacy of great romantic-comedies motivated by female vengeance like 9 To 5 (1980) and The First Wives Club (1996), Legally Blonde charts the journey of a woman out to get hers. That upstart is Elle Woods, a sorority sister turned aspiring lawyer, played by Reese Witherspoon in a star-making turn. After getting dumped by her long-time boyfriend for – among her perceived sins – being “too blonde”, Elle enrols at Harvard to pursue a career as a lawyer and prove to her ex that she can be a serious prospect. However, what started out as a somewhat superficial venture soon morphs into a true calling as Elle falls in love with not just the law but a sense of purpose that has absolutely nothing to do with a man.

Australian filmmaker Robert Luketic makes his directorial debut with Legally Blonde following the success of his short Titsiana Booberini, which become somewhat of an Australian cultural touchstone. With a screenplay from Karen McCullah and Kirsten Smith – inspired by the real-life story of Amanda Brown in her novel – the cast is stacked with sharp dialogue executed by even sharper performers. At the time, legendary film critic Roger Ebert wrote that Legally Blonde was “impossible to dislike, although how much you like it may depend on your affection for Reese Witherspoon” and that sentiment has only grown. In part, due to the enduring timeliness of the themes which flipped the conventions of the rom-com by moving the love story into the background, while Elle Woods’ career ambitions and female relationships remained firmly in the foreground.

The breakout short film for Australian director Robert Luketic, Titsiana Booberini follows a check-out chick who goes through a metamorphisis after discovering a hair removal cream for her upper lip. Following on in the legacy of other female-centred coming-of-age stories like Muriel’s Wedding – it even features the same villain, Sophie Lee – it swept the international film festival circuit and became a pre-cursor for the quirky comedies that dominated the naughts (Kath & Kim, Napoleon Dynamite, Juno). 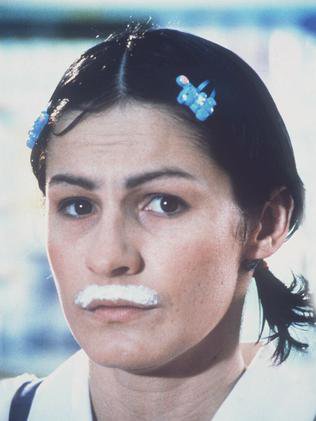