Miranda Tapsell cracks the modern rom-com as the star, writer and producer of the intelligent, intuitive and inclusive Top End Wedding.

Finds a sweet spot between the traditional demands of its genre and other, richer traditions altogether.

Stick around after the screening for a pre-recorded interview with actor Shari Sebbens.

A wedding as the central conceit of a romantic comedy is a tried-and-true formula, yet in Top End Wedding the trope is given a fresh shake-up. Miranda Tapsell and Gwilym Lee play Lauren and Ned, two corporate professionals who get engaged on a whim and then have to track down Lauren’s mother Daffy (Ursula Yovich) after she goes AWOL in the Northern Territory. With just ten days until their nuptials, the pair embark on a perilous quest to reunite Lauren’s parents and reacquaint themselves with what’s really important about their union. Tapsell made her film debut in The Sapphires, directed by Wayne Blair, which launched her on the global stage but it’s really Top End Wedding that announces her as a star (especially because of the skill she demonstrates behind the scenes as a driving force on the project). It’s not surprising then that she and Blair make for such a compelling duo, both intimately understanding a production from top-to-bottom as multi-hyphenate creatives (Blair has juggled a simultaneously successful writing, directing, producing and acting career for the past 20 years).

That confidence across the board sees Top End Wedding become not only a great example of what the future of rom-coms can look like, but what the future of Australian film can look like with authentic representation across the board in terms of age, sexuality, race, and gender. It’s the specificity of Tapsell and Blair’s voices that helps create the film’s universal charm, with the mother and daughter story just as vital as the telegraphed romance … and just as emotionally rewarding.

Top End Wedding premiered at Sundance Film Festival in 2019, long a platform for diverse filmmakers and filmmaking from around the world with Variety writing at the time that it “finds a sweet spot between the traditional demands of its genre and other, richer traditions altogether”. Not since Taika Waititi’s breakthrough Boy – another Sundance alum – has a film managed to deploy light and levity so deftly and catch the audience off-guard with its thoughtful and nuanced conversations about Indigenous identity. Top End Wedding is a modern masterpiece of the genre and manages to do a thousand things simultaneously without ever once letting the audience see the effort required to pull them off. 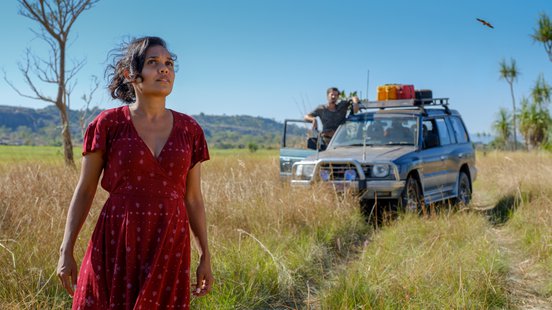