For the good of the nation

Our story starts with Victoria's State Film Centre (SFC), which in turn starts with the British documentarian and propaganda proponent John Grierson, who travelled to Australia in 1940 espousing the importance of national film bodies as a medium to shape the national psyche and create consensus between citizens. [1]

Grierson’s enthusiasm for the film medium had two clear consequences: first, the Australian National Film Board was established in 1945. A forerunner to the agencies now called Screen Australia and the National Film and Sound Archive, the ANFB was tasked with a wide-ranging remit of nation building: “to expand, promote, assist and co-ordinate the production, distribution and importation of films for school and adult education, rehabilitation, social development, international understanding, trade and tourist expansion and immigration”. [2]

This was the beginning of an era described as the “film appreciation decades of the 1940s–1960s”, and a period when states established their own film institutions as part of a project of citizenship. [3]

The second consequence of Grierson's visit came in 1946, when the State Government of Victoria established the State Film Centre at 110 Victoria Street, Carlton. Screenings commenced at the Radio School in Melbourne Technical College (now RMIT University) and at Nicholas Hall, on the grounds of the Wesley Church in Lonsdale Street. [4]

In this post-war period, film – particularly documentary film – was highly valued as a form that could educate, create consensus and build national mythology. The SFC maintained its own library of documentary and educational film materials, and supported regional access to moving image content through regional lending and a mobile projection unit. [5]

The SFC Reference Library grew to be the largest of its kind in Australia, and became an integral resource for schools, government departments and film agencies.

A production house in the golden age of film and television. 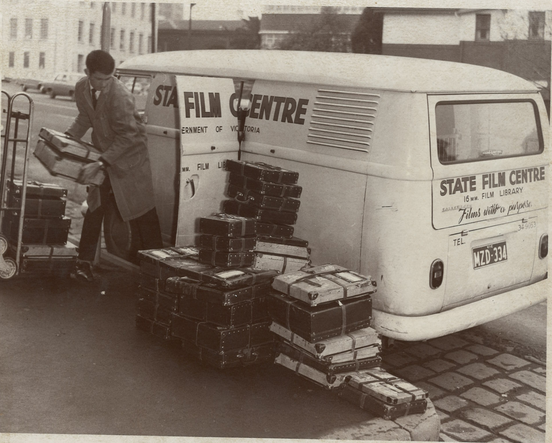