Emerging from the State Film Centre and funded by the Victorian Government, ACMI was launched on 1 January 2002. Ambitious in conception and vision, this new national museum opened to the public in October 2002 at Federation Square, Melbourne’s new community meeting place.

As outlined in the Film Act, key elements of ACMI’s identity relate to the promotion, exhibition, creation and collection of the moving image. Visitors would be given a warm welcome by Visitor Services Officers (VSOs), supported and guided by expert volunteers and invited to explore, create and connect with a rich range of film, exhibition, public, education and industry programs.

A significant feature of the new ACMI, with its range of gallery spaces, would be the curation and presentation of the exhibitions so integral to ACMI’s establishment as an iconic and unique cultural destination. Education, which was fundamental to the SFC’s identity from its inception, would also be central to the new ACMI, built on an understanding of the power of what can be learned from and about the moving image by visitors of all ages and from all walks of life.

We established our own internal film programming team in time for the opening of our new purpose-built facilities at Federation Square in November 2002. ACMI’s world-class cinemas opened to the public in November 2002, and were equipped to screen in an impressive range of formats: Super 8, video, DVD, 16mm, 35mm and 70mm film and digital projection, and quickly attracted large audiences (over 65,000 viewers in the first seven months). Among the first film seasons curated by our film team were a contextual season that responded to ACMI's Deep Space: Sensation and Immersion exhibition and a season dedicated to the then still nascent digital technology revolutionising cinema exhibition, appropriately titled Digital Cinema. Built on the mantra "movies that matter", our film program gave diverse audiences the opportunity to connect with us through curated film seasons and retrospectives, festival and industry programs and special events. As audiences grew, communities of viewers emerged in response to regular programs such as Australian Perspectives, Seniors Cinema, Kids’ Flicks and the exclusive monthly screenings of new films and restored classics as part of the First Look program.

ACMI's exhibition program was launched in 2003 in a gallery recognised at the time as the largest screen gallery in the world – who could believe it was once a train station!

The inaugural exhibitions were the stunning Deep Space: Sensation & Immersion, which explored notions of time, space and movement, and Ngarinyin Pathways Dulwan, a multi-channel work that invited visitors into Ngarinyin country to watch, listen and learn from four Ngarinyin munnumburra – experts in traditional law, culture and art. Due to the ongoing significance of this project, even the exhibition furniture has been imbued with cultural value by the traditional owners and, because of this, remains in the care of the ACMI Collection, along with the moving image work.

The interconnection between memory, meaning, stories and the moving image inspired the introduction and development of ACMI’s Digital Storytelling program. In keeping with ACMI’s commitment to encouraging expression through the moving image, our focus was on giving participants the opportunity to shape and share stories with personal significance. Supported by ACMI staff, storytellers were introduced to basic media production and video-editing technologies. Over the years, hundreds of stories were created by members of our community, as they discovered the power of creative self-representation:

The digital storytelling program supports the notion of participatory culture in a way that allows communities to find a ‘voice’. Such a program also enriches the lives of participants by enabling them to draw upon and develop their own creativity in the process of exercising this voice.

With this idea to the fore, a number of DST workshops engaged with communities dealing with particular hardships, loss and even trauma, while others focused on community building and identity. You can find a range of digital stories produced as part of ACMI’s DST program on our YouTube channel, such as the following films, The Little Frenchman and Leaving My Country.

The Little Frenchman by ACMI Collection

Leaving My Country by ACMI Collection

The focus on memory and voice that was part of the DST program was further developed in the Memory Grid, an interactive exhibition space launched in 2004. It was devoted to sharing stories in a way that broke down alienating hierarchies of value and prestige and created connections across space, time and experience.

The unique program of films (both amateur and professional), digital stories and interactive works proved so popular, it expanded into a suite of five Memory Grid pods dedicated to the exhibition of over 200 short films. A small insight into its impact on visitors can be gleaned from some visitor feedback:

After dropping by with half an hour to spend in your Memory Grid, I left moved to tears. Thank you for creating a place for all these stories – I’ll be back, but with tissues next time.

An important pillar of ACMI’s new identity as a museum of the moving image was the shift in focus to include videogames. In 2003, the launch of the experiential multiplayer videogame acmipark was a recognition of the cultural and creative significance of videogames as a moving image form. acmipark was also a way for ACMI to celebrate and imaginatively transform its physical location at Federation Square into a “fantastic abstraction”, with subterranean caves and a natural landscape in place of city buildings. In 2005 we launched the Games Lab, permanent space devoted to the exploration and exhibition of games.

The Lab was confirmation that videogames had well and truly made it to the heart of ACMI and a noteworthy example of the museum’s focus on creativity and innovation in games. The inaugural exhibition State of Play: Games with an Agenda explored the political and intellectual impact of games. Between July 2006 and June 2007, 48,000 visitors checked out the Games Lab.

During this period the Education team championed the role of videogames in learning and have continued to lead in this area. ACMI was also at the forefront of using green screen technology in school programs centred around creative collaboration and on-screen performance. Green-screen programs were delivered in ACMI’s fully-equipped TV studio, while our creative production studio gave students the opportunity to work with professional quality equipment and technology to make moving image works as part of collaborative teams.

With the arrival of new ACMI CEO Tony Sweeney in 2005, there was a push to connect more widely with audiences across the cultural landscape, including further building ACMI as a destination for tourists, families and school groups.

In 2006, ACMI celebrated 50 years of TV broadcasting in Melbourne, which had arrived just in time for the 1956 Melbourne Olympics. TV has always been a great connector and in commemorating its arrival, we pulled out all the stops. TV50 was an irreverent and nostalgic look back at the history of Australian TV production and viewing, and included a spectacular wall of 750 televisions – an ACMI-designed video sculpture that brought to mind the iconic work of Nam Jun Paik.

Our commitment to television as a focus of programming and an important way of connecting with both industry and the TV-viewing community is ongoing and, since 2017, includes hosting the international TV Festival Series Mania.

The following year, ACMI's exhibition celebrated the computer animation studio Pixar. Pixar: 20 Years of Animation was a blockbuster, a magnet for families, fans and animation devotees. An ACMI innovation in the exhibition was the commission of a giant Luxo Lamp, which sat at the Flinders St entrance and operated a beacon for audiences that flocked to discover the secrets of computer animation.

Visitors to Pixar adored the Toy Story zoetrope created for the exhibition, so ACMI commissioned our own Australian-themed 3D zoetrope for our permanent exhibition, Screen Worlds. We have subsequently developed another dynamic zoetrope based on the Cuphead game for our re/newed exhibition The Story of the Moving Image. The record crowds lured to ACMI by Pixar were back in 2008 for Game On, another blockbuster that generated queues of patient visitors. This time we were building on the excitement games were generating at ACMI with “the world’s largest exhibition dedicated to the history and future of videogames”. [2]

With a slate of exhibitions that ranged between videogames, cinema, TV, animation, production design, fine art and creative moving image technologies, ACMI was connecting with wider and more diverse audiences. It was time to create an exhibition that would bring these diverse audiences together. 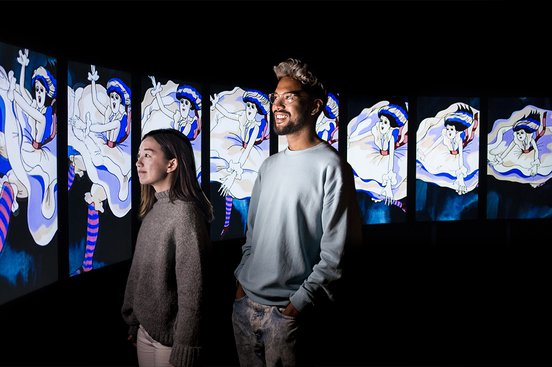