2009 was the beginning of our second chapter, marked by the opening of Screen Worlds, a permanent exhibition that took on the ambitious task of telling the remarkable story of the moving image in all its forms.

ACMI’s multidimensional character and purpose were its creative strengths, but the challenges of connecting with our audience and building a recognisable identity began to emerge. Screen Worlds was a solution to these conundrums.

Placed at the heart of ACMI, Screen Worlds was open every day of the year (except Christmas Day) offering visitors a rich and varied experience based on the wide-ranging appeal of the moving image. It was a vibrant eclectic showcase packed with stories, screens and interactive moments, attesting to the diversity, innovation and magic of film, TV, videogames, digital culture and moving image art. And it was very successful, attracting 4.6 million local, interstate and international visitors over its ten-year history.

With a new-look Games Lab at its heart, Screen Worlds looked at moving image history, Australian screen culture and the experiential impact of the moving image. It also featured the significant story of how Australia’s First Peoples took control of the camera, their images and their stories. Popular exhibits included: the Mad Max interceptor; a Matrix-inspired 360 degree time-slice booth; and our Ty the Tasmanian Tiger 3D zoetrope. You and I Horizontal II, an esoteric solid light sculpture created by artist Anthony McCall, emerged as an unlikely favourite with visitors, especially school students who proved endlessly fascinated by its combination of light, darkness and smoke.

Screen Worlds was part of a transformed ACMI which also included two new production studios, a second gallery, and the Mediatheque, a partnership with the National Film and Sound Archive (NFSA) and supported by major screen cultural organisations in the country. The collaboration made a huge repository of moving image titles available to researchers, while introducing ACMI’s onsite visitors to thoughtfully curated programs they could watch as part of our view-on-demand (VOD) offer (by 2014 this included over 1,000 titles). Within the evolving mediascape, the Mediatheque offered a different model for onsite access and the lending library that had been so central to the SFC’s purpose was phased out. However, by means of our new model, particularly the themed VOD packages, ACMI Collections continued to engage with the key principles of access, audience and education that had inspired the establishment of the SFC more than half a century earlier. ACMI’s model was further reimagined in 2017/18 when the ACMI and NFSA Collections moved beyond the walls of the Mediatheque and became accessible on a range of pop-up video interfaces distributed across the our museum. This was an interim and temporary measure that was part of a much wider process of digitisation aimed at making more of the ACMI Collection accessible to our audience online.

During ACMI’s second phase our temporary exhibitions continued to present and engage with the infinitely diverse facets of moving image culture. Our large screen gallery (the former station) hosted an exciting program that moved between popular blockbusters and thought-provoking explorations of moving image art. In 2010, Tim Burton: the Exhibition proved to be a special moment at ACMI where our diverse audience was brought together by Burton’s fantastical imagination and heartfelt representation of the experience of outsiders. Primary, secondary and tertiary students rubbed shoulders with young urbanites, independent creatives and middle-aged fans, as we recorded our largest audience ever – a record 276,000 visitors. Other highlights of our extraordinary Gallery 1 program during this period included: Yang Fudong: Filmscapes (check out our curator discussing Yang’s The Fifth Night), William Kentridge: Five Themes, Hollywood Costume and Wallace & Gromit and Friends: The Magic of Aardman. During this period, ACMI also curated its own internationally-focused exhibitions, most notably DreamWorks Animation, Game Masters and Wonderland, all of which have become part of our international touring program.

The opening of our smaller Gallery 2 in 2009 became an opportunity to invite our growing audience to experience an exciting and wide-ranging program of themed exhibitions, installations and immersive artworks. Gallery 2 has always been free to enter and its position next to our permanent gallery has made it inviting and accessible. Behind-the-scenes exhibitions focused on significant Australian productions such as Adam Elliot’s Mary and Max, the Academy Award-winning The Lost Thing and First Nations sci fi TV series Cleverman. Visitors have also been able to experience mesmerising moving image artworks and installations, including some exceptional commissioned works. It was so exciting to witness Ian Burns’ live video and sculpture installation In the Telling luring visitors of all ages into the gallery with its pieced-together charm. Warwick Thornton’s Mother Courage used sound to break through the walls of the gallery that held his travelling installation captive, while Lynette Walworth’s VR experience Collisions transported viewers across desert landscapes and into the life experience of Martu elder Nyarri Nyarri Morgan. Daniel Crooks’ mesmerising Phantom Ride engaged visitors of all ages and has now been given pride of place in our new permanent exhibition.

While ACMI’s vibrant galleries and exhibitions connect with large and diverse audiences, our cinemas have also continued to foster audience engagement, industry connections and the showcasing of thoughtful and thought-provoking themes and ideas.

In July 2014 both ACMI cinemas received an upgrade. This time-lapse documents the new cinema screens being installed.

Our film programming team has curated dozens of expansive 'Focus On' retrospective seasons dedicated to film directors including Spike Lee, Pedro Almodovar, Wong Kar-wai, Guy Maddin, Catherine Breillat, Victor Erice, Abbas Kiarostami and Kelly Reichardt, notable actors including Claudia Cardinale, Linda Lin Dai and Parker Posey, and many significant, unexpected and sometimes whacky themes. These deep dives have been presented alongside a year-round calendar of spotlight seasons, extended runs and one-off film events. ACMI’s film programs team has effectively balanced the audience loyalty that comes with regular programs such as matinees, the cinephiles’ desire for foundational and cutting-edge cinema and diverse audiences to be lured in by special interest programming. We’ve hosted Tim Burton introducing a newly-struck 35mm print of Pee Wee's Big Adventure, a ribald Richard E. Grant delighting fans in Q&A at a screening of Withnail and I and the grand dame of the French New Wave, Agnès Varda, beaming in via Skype and enchanting the opening night audience of ACMI's 2014 retrospective, Joyous Curiosity: The Cinema of Agnès Varda. We’ve invited orchestras, bands and musicians to accompany film programs, heard the "ker-thunk" of 200 viewmasters changing slides as part of our all-night White Night program and, during COVID 19, joined the Melbourne Cinémathèque in presenting the Virtual Cinémathèque as a way to bring the magic of the shared cinema experience into people’s homes. And ACMI Cinemas have consistently foregrounded the social impact of film and its capacity to educate and promote change: Behrouz Boochani's interview following the premiere screening of Chauka, Please Tell Us The Time, I Am Not Your Negro, We Don’t Need a Map are just a few examples. Our approach is reflected in the Change Your View trailer highlighting our thoughtful, challenging and unique film programs.

Our Public Programs team plays a fundamental role in activating ACMI’s rich and multifarious onsite, offsite and online program, as well as targeting and connecting with diverse groups and communities. The Public Programs contribution to the ACMI community ranges from: school holiday production-based programs; whole weekends filled with family activities and events; an infinite slate of talks and interviews connected with countless moving image perspectives and ACMI programs; regular get-togethers such as the Women & Non-Binary Gamers Club; carnivalesque extravaganzas such as the Total Bowie weekend; the launch of the 2016 DOOM title (including director interview and 9ft tall chainsaw carved statue); a powerful musical response to I Am Not Your Negro; and a multi-faceted International Women’s Day program in the wake of #timesup. Continuing the tradition of equity and access central to ACMI’s long-lived DST program, our Public Programs has also been proactive in making ACMI a welcoming place for autistic people and those with sensory sensitivities, as well as coordinating the Queer Filmmaking Workshop as part of the 2018 Queer Film Festival. And this is just the tiniest fraction of the responsive, creative and connected programming that has been rolled out by the team.

Just as ACMI’s Public Programs team is at the heart of ACMI’s engagement with our audience, the Education team has been responsible for extending and translating our offer to connect with students, ranging from kindergarten to tertiary level, and their teachers. We’ve come a long way from the SFC’s first foray into teaching film-as-text. While our film programs for VCE English students and teachers are still very successful, they are just a fraction of what we present. As well as a vibrant cinema program of film screenings and talks, we offer hands-on creative workshops in our production studios, link up with ACMI exhibitions and connect with festivals and other special programs. These workshops explore the moving image in relation to a range of digital and media technologies, narrative forms and creative practices: filmmaking, green screen, game design and animation programs have remained staples, while self-portraits using GIFs, B-grade sci fi trailers and a fantastical journey inside the human body are just a few examples of the special programs we have designed for students over the years. There is no better way to engage with screen culture than making your own work and for 16 years, ACMI’s film, animation and game making competition Screen It encouraged students around Australia to get creative in response to our yearly theme. In 2019 we said farewell to Screen It, but look forward to forging new connections with our next generation of moving image makers. ACMI has also been at the forefront of virtual and online learning. In 2011, ACMI’s Star Voyager: Exploring Space on Screen exhibition was the catalyst for a huge virtual event that featured NASA astronaut Rex J. Walheim beaming out live from the ACMI studio to thousands of Victorian students. In 2014, another ambitious virtual event featured DreamWorks creatives beaming in from their studio in California. Beyond such spectacular events, we’ve enjoyed being able to connect with our audience more regularly by, for example, using videoconferencing to support entrants to Screen It, present comedy scriptwriting lessons with the Australian Children’s Television Foundation (ACTF) and introduce students to the creative practice of screen professionals in Meet the Makers.

The appointment in 2015 of current ACMI CEO Katrina Sedgwick was an opportunity for ACMI to continue and extend what we were doing well, while also responding purposefully to huge changes taking place in screen and participatory culture, technologies and industry, changes that drill down into the lives of every Australian. As well as foregrounding the onsite and online experience of our audience, championing the ACMI Collection, and encouraging productive partnerships between ACMI teams, our new CEO began plans for ACMI X, a co-working space with the aim of strengthening ACMI’s industry connections and providing a place for creative practitioners to work, collaborate and build cross-disciplinary connections. Launched in 2016 and situated in the Melbourne Arts precinct, ACMI X has brought together ACMI staff, the NFSA Melbourne office, university partners and creative individuals, start-ups and businesses.

Throughout our history – stretching all the way back to the post-war emergence of the SFC, ACMI has responded to the changing landscape of moving image culture. This is at the heart of our identity and our purpose in fostering a connected community of watchers, makers, and players celebrating the wonder of the moving image. We showcase and interrogate the moving image in the present in the context of both the rich history of creation, innovation and storytelling and the promise of future innovation and creative discovery. With this to the fore, Katrina Sedgwick has spearheaded ACMI’s next chapter, bringing the ACMI community together to reimagine our museum and its engagement with our audience through the next decade. 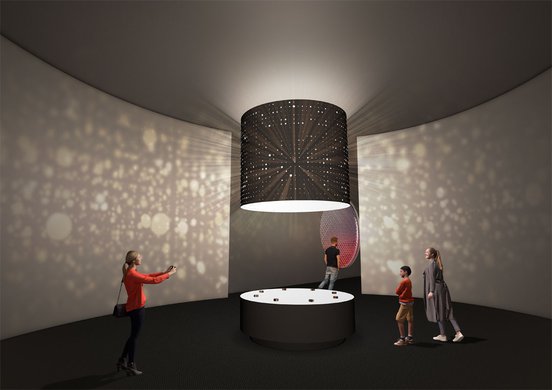