Steven Spielberg redefines what he created – the Summer blockbuster – with a technically dazzling and emotionally enduring piece of high-concept action cinema.

The effects have barely aged and the joy is timeless.

The phrase ‘needs no introduction’ is often overused and frequently when the thing in question most definitely does need an introduction. In the case of Jurassic Park, however, the saying is undeniably true. Based on Michael Crichton’s best-selling novel of the same name, it follows an eccentric billionaire (is there any other kind?) who builds a theme park with real-life dinosaurs genetically engineered from long lost DNA. While having various experts out to visit the ground-breaking attractions, things go horribly wrong with the dangerous and deadly relics attacking the guests. Few people are better qualified when it comes to crafting a popcorn blockbuster than Spielberg and he utilises every skill he learnt in the decades since Jaws (1975) first swam into cinemas.

Breaking one billion dollars at the box-office, to say the film was a ‘hit’ is to somewhat understate its pop cultural importance. It was a movie but also a movement, with sequels still being released and breaking ticket records to this day. Yet the franchise as a whole has never been able to reach the dizzying heights of the initial instalment, which captured the wonder of not just the characters on screen but us as the audience getting to see technically brilliant renderings of cinematic dinosaurs. The special-effects and the spectacle was grounded by the casting of Sam Neill, Laura Dern and Jeff Goldblum as the trio of adult characters and character actors like Richard Attenborough, BD Wong, Samuel L. Jackson, Bob Peck and Wayne Knight in supporting roles. The sum of its parts in all the best possible ways – and featuring one of the great John Williams scores – Jurassic Park is as affecting on the big screen now as it was then. 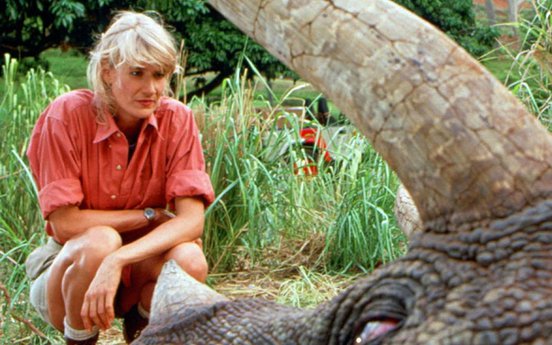