Meet our curators and hear them talk about their inspiring journey in crafting our spectacular new exhibition The Story of the Moving Image.

Kate ten Buuren (First Nations / Moving Australia)
Sat 20 Feb at 4pm
Kate ten Buuren is an artist, curator and writer currently working as Curator at ACMI. As a Taungurung woman, Kate’s multi-disciplinary practice is underpinned in First Nations self-determination, self-representation and knowing one another; ultimately forming the foundation for her interest in contemporary visual art, activation, film, and oral traditions. Previously, she was Curator at the Koorie Heritage Trust and is an alumnus of the Wesfarmers Indigenous Arts Leadership program at the National Gallery of Australia.

Louana Sainsbury (First Nations / Moving Australia)
Sat 20 Feb at 11.10am
Louana Sainsbury is a Darug woman, currently living and working on the lands of the Boon Wurrung and Wurundjeri peoples. As one of the First Nations Curators at ACMI, Louana has been working as part of the renewal project, specifically developing First Peoples content and stories for the new permanent exhibition. Previously, Louana has worked as a producer and programmer for Arts Centre Melbourne, Sydney Festival, Performing Lines, Think+DO Tank Foundation, Urban Theatre Projects and Belvoir. She has also toured nationally with Bangarra Dance Theatre as an Assistant Stage Manager trainee.

Thara Krishna-Pillay (Moving Australia)
Sun 21 Feb at 4pm
Thara Krishna-Pillay is a Programmer and Curator at ACMI, and co-curated the Moving Australia section of The Story of the Moving Image. She designs and delivers experiences that explore ideas, tell stories, and give insight into cultural collections. She has worked in the arts and cultural sector for over 20 years as a curator, producer and programmer. She spends a lot of her time watching films from 1930s–50s, loves classic Hollywood costume design and musicals and has strong opinions about historical accuracy in film.

Chelsey O'Brien (Moving Pictures / Moving Minds / Moving Worlds)
Sun 21 Feb at 12.30pm, 2pm & 3.30pm
Chelsey O’Brien is an Assistant Curator at ACMI and was a part of the curatorial team that developed the new permanent exhibition The Story of the Moving Image. She is also a Film Programmer at the Human Rights Arts and Film Festival and has written for a variety of publications including Imprint Journal. Chelsey is interested in the history of early cinema, movie-going culture and contemporary moving image practice. She holds a Bachelor of Arts and Fine Arts as well as a Masters of Curatorship.

Matt Millikan (Interpretation / Constellations)
Sun 21 Feb at 4pm
Matt Millikan is the Editor (Interpretation) at ACMI, as well as the self-proclaimed Chief Astrologer. He’s responsible for writing, editing and curating the content that appears in the Constellation, the Visit-Extension website and the wall labels throughout The Story of the Moving Image. Prior to leading interpretation, he was the Digital and Social Media Manager for half a decade and joined ACMI after working as a journalist and editor at ArtsHub. He’s written for numerous publications and was shortlisted for the Kill Your Darlings Unpublished Manuscript award and a recipient of the inaugural KYD/Varuna Copyright Agency Fellowship.

Arieh Offman (Games Lab presented by Big Ant Studios)
Sat 20 Feb at 2pm
Arieh Offman is a Programmer and Assistant Curator at ACMI. He curated the Games Lab within The Story of the Moving Image. A self-confessed nerd for all things videogames and pop culture, Arieh has written for several publications including Kotaku and ACMI's The Story of Videogames on our Visit-Extension website. Arieh is also an educator, has curated numerous videogames events and festivals, including the recent Big Games Night In as part of MIGW 2020, and is the lead programmer of the ACMI+RMIT Audience Lab series of live beta-testing events. He holds a Bachelor of Visual Art and a Masters of Education.

The Story of the Moving Image

Journey through the past, present and future of the moving image through interactive experiences, digital innovation and captivating stories. 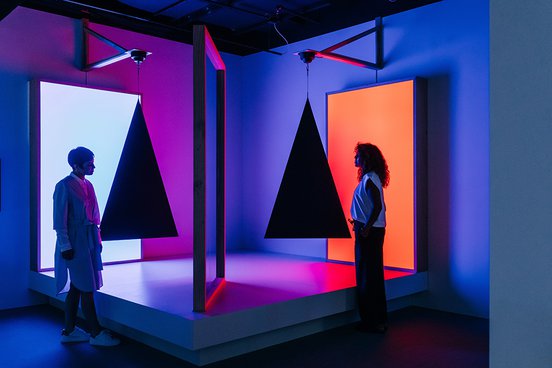