Jacques Tati’s prescient and brilliantly staged comedy on modernity is one of the great, visionary works of “architectural” cinema

Tati's most brilliant film, a bracing reminder ... that films can occasionally achieve the status of art

After the phenomenal global success of Mon Oncle (1958), Jacques Tati was given carte blanche to create his next film. Working meticulously and experimentally over the next nine years, Tati created one of the great works of “architectural” cinema, overseeing the construction of a massive working mini-city on the outskirts of Paris and producing a profound spatial and perceptual comedy of modern humanity, and the places and spaces it constructs for itself. Paradoxically, Playtime acts as both a parody of modernism and one of its great cinematic emblems.

Very much indebted to and gently critical of the legacy of the international style and globalisation, this prescient, brilliantly calibrated and staged comedy on modernity celebrates both the absurdity of the contemporary built environment and the opportunities for “play” and “time” it allows its human occupants. Initially designed to be only screened on 70mm and in optimal circumstances, this grand “folly” was financially ruinous to Tati but has emerged as one of the great visionary and truly modern works of the cinema. As a “perceptual”, “spatial” and even “pedagogical” comedy, Playtime is one of the great cinematic explorations how we engage with the world (including when watching movies themselves).

Playtime is streaming for free on Beama Film. You'll need to create an account to watch – it’s free, quick and easy. 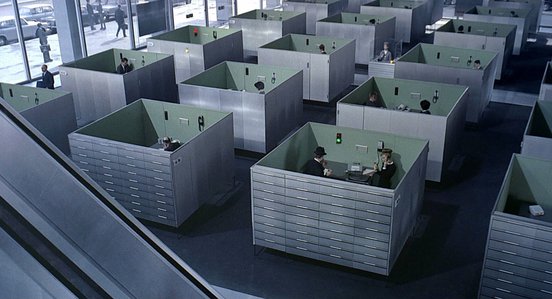