I Walk the Line

For this week's Virtual Cinémathèque we head to the West with Decision At Sundown (1957) and Gunman's Walk (1958).

For week 6 of the Virtual Cinémathèque, we turn to the end of the “golden age” of Hollywood for a fascinating pair of westerns produced by Columbia Pictures. On the rise in the 1950s, Columbia was the home for such celebrated Oscar-winning “independent” super-productions as From Here to Eternity, On the Waterfront and The Bridge on the River Kwai, but also provided striking opportunities for then largely under-recognised but now often celebrated directors to create taut, elemental and ethically complex variations on well-worn genres like film noir and the western.

Both Budd Boetticher and Phil Karlson rose through the ranks of the studio system before getting their first breaks on B-grade melodramas, comedies and action movies. Boetticher, who had a prior career as a matador in Mexico, worked for a range of studios from the early 1940s, while Karlson, who grew up in the melting-pot 1920s Chicago, initially found work doing odd jobs at Universal while studying for his law degree, before finding his metier in a series of tough, violent and bracing studies of urban crime and corruption, often made for Columbia studios.

By the late 1950s, and despite the spike in epic productions like The Big Country and The Magnificent Seven, the western had largely shifted to a more domestic mode suited to the smaller scale of television, which was then dominated by western-themed series like Gunsmoke. The two films profiled in this program, Boetticher’s precise, elemental chamber western, Decision at Sundown, and Karlson’s lean, morally sophisticated expose of traditional western values, Gunman’s Walk, are both fascinating illustrations of the increasingly resistant, complex and revisionist direction of the western as a film genre. While Gunman’s Walk represents the peak of Karlson’s work in the western (brooding star Tab Hunter also claimed it was the film he was most proud of), Decision at Sundown is a slightly atypical contribution to a now celebrated series – often identified as the “Ranown cycle” – made by Boetticher, craggy star Randolph Scott, and co-producer Harry Joe Brown across the late 1950s.

As Martin Scorsese has suggested, Boetticher worked with the “bare essentials” of the western, refining its “archetypes… to the point of abstraction”. The implication of Scorsese’s analysis is that nothing is wasted in these films, a claim that could also be made about Karlson’s often intense, episode-filled work. Boetticher’s movies were commonly and matter-of-factly shot in about two weeks, and their reliance on intricately measured, somewhat leisurely scenes of characters talking, riding or walking through the landscape is reminiscent of many television westerns. But it is the terse quality, everyday philosophy and overwhelming clarity of conversation, ethical considerations and movement that is remarkable. As David Thomson has claimed, Boetticher’s career “is one of the most interesting ever confined to B pictures”, while Karlson’s filmography reaches a peak in the mid to late 1950s with his lacerating studies of American society across the western and crime genres (including the pilot for The Untouchables). Please join us in our visit to the bracingly unsentimental and morally rich worlds of the two of the finest genre directors of American cinema in the 1950s. 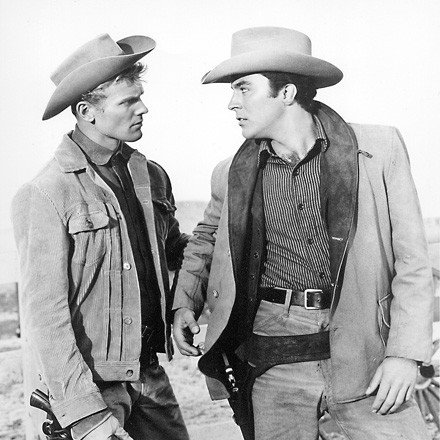