Unfortunately due to COVID-related staff shortages, ACMI has had to reduce the operating hours of our cinemas resulting in the cancellation of a number of cinema sessions. We have cancelled the 12 Jan 7pm Mad Max: Fury Road session. Affected ticketholders will be contacted and refunded directly. Please check your email or contact us if you have any questions. We apologise for the inconvenience and hope to see you again soon.

At 70 years old, George Miller makes a modern masterpiece by reinventing his own creation and blowing up the conventions of blockbuster filmmaking.

“Hope is a mistake,” says Tom Hardy’s reimagined Max Rockatansky. “If you can't fix what's broken, you'll go insane.” A fitting line in the context of the film, but also outside of it as well, with visionary Australian filmmaker George Miller bringing his long-tortured production to completion with Mad Max: Fury Road (2015). A cul-de-sac of a movie, it follows Imperator Furiosa (Charlize Theron) as she drives across a post-Apocalyptic wasteland with some willing passengers – The Wives (Rosie Huntington-Whiteley, Zoë Kravitz, Riley Keough, Courtney Eaton, Abbey Lee) – and some not-so-willing – Max (Hardy) and Nux (Nicholas Hoult). With a who’s who of Australian character actors thrown in as villains and allies alike, the pace is as relentless as the War Rig charging from – and then eventually back to – its starting destination.

Where must we go... we who wander this Wasteland in search of our better selves?

Nominated for 10 Academy Awards – and winning six – there’s not much to say about Mad Max: Fury Road that hasn’t already been loudly and enthusiastically said. A testament to the singular creative vision and stamina of Miller, it’s more than just a visual spectacular. The contributions of key women throughout the creative team – editor Margaret Sixel and costume designer Jenny Beavan – help breathe new life into what was once a testosterone-loaded franchise, making something modern, something feminist, and something truly unique that remains timeless long after the (literal) dust has settled.

See objects from the Mad Max film series on display in The Story of the Moving Image, our centrepiece exhibition. 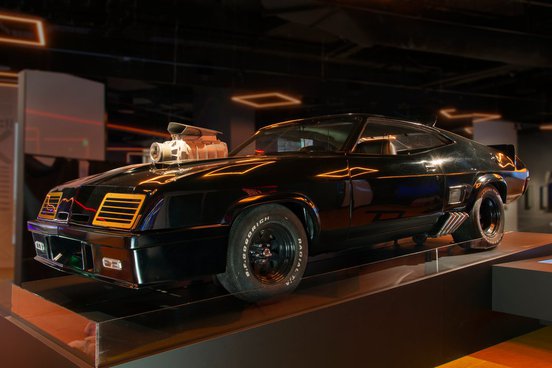 The Story of Film: A new generation