A fascinating and tremendously well-made film

Kelly Reichardt's unsentimental and thought-provoking spin on the Western.

The year is 1845 and three pioneering families cross the treacherous Oregon Trail under the guidance of Meek, a grizzled frontiersman who insists, "We're not lost, we're just finding our way". As their wagons creak and groan across the parched earth, tensions rise and the settlers are forced into an unthinkable decision.

Based on actual events, Meek's Cutoff reunites Kelly Reichardt with screenwriter, Jon Raymond (Old Joy, Wendy and Lucy). Their combined approach to storytelling is unsentimental and deeply thought-provoking, aided in large part by Michelle Williams' stand-out performance, which provides the film with much of its steely resolve and humanity.

Photographed in the traditional Western screen ratio of 1:1.33, Christopher Blauvelt’s cinematography encloses its characters within a tight frame, zeroing in on the heroines, Emily (Michelle Williams), Millie (Zoe Kazan) and Glory (Shirley Henderson). For Sight and Sound's Nikki Baughan, this “focus [on the women] showcases their inherent tenacity and strength despite their subservient status".

Since its premiere at the 2010 Venice Film Festival, Meek's Cutoff continues to be lauded for its highly nuanced performances, with Paul Dano and Bruce Greenwood complementing the mainly female cast. Reichardt's bold reinterpretation of the Western, one of cinema's most revered and masculine genres, remains essential viewing.

Accompanying Meek's Cutoff is a short film The Frontier Experience by the late American director Barbara Loden, best known for her groundbreaking feature film Wanda. In the New York Times, Manohla Dargis said of Loden’s film, "By turns awkward and elegant, the film is further evidence of a directing career that could have been. Ms. Loden — who until the recent resurrection of Wanda was often treated as a footnote in film histories — died in 1980 at 48."

Meek's Cutoff is streaming for free on Tubi. You'll need to create an account to watch – it’s free, quick and easy. 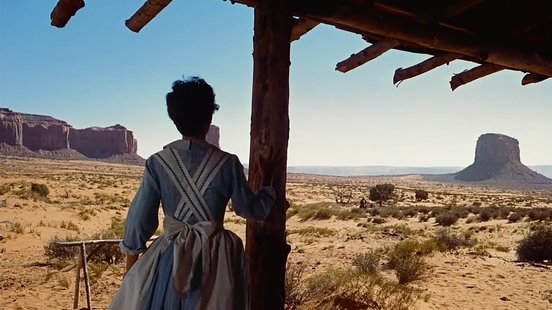